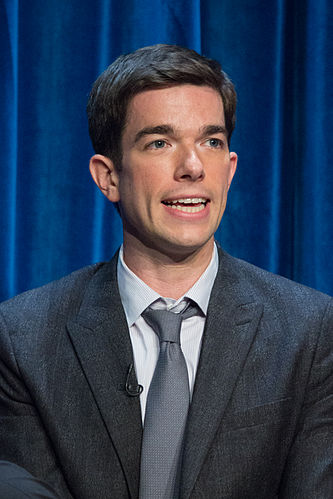 8.0 /10
Based on 6 specials
John Edmund Mulaney (born August 26, 1982) is an American stand-up comedian, actor, producer, and writer that is best known for his work at Saturday Night Live and his various stand-up comedy specials. From an early age, John Mulaney has said to have known he wanted to go into show business after watching I Love Lucy at the age of five. At seven years old he was already part of a children's sketch group during which he got offered and performed various roles. John Mulaney went to school at St. Ignatius College Prep and he majored in English and minored in theology at Georgetown University. While studying at Georgetown University he joined the school's improv group. This is where he met Nick Kroll and Mike Birbiglia with which he still works together. After his graduation from Georgetown University, John Mulaney moved to New York City to pursue a career in comedy. He first started working as an assistant at Comedy Central but left to start working independently after a few years. John Mulaney was discovered after performing on Late Night with Conan O'Brien after which he was asked to audition for Saturday Night Live in 2008. He unexpectedly got to join SNL's writing team and would occasionally appear on the Weekend Update segments of the show. He continued to write for various other shows after his work for SNL. Besides his work as a writer, John Mulaney has long been working as a stand-up comedian and has been a headliner since 2008. He released his first stand-up comedy album, The Top Part, in 2009 and his first stand-up special, New in Town, in 2012. His third special and his first Netflix special, The Comeback Kid, was released only three years later and received critical acclaim. After the success of The Comeback Kid, John Mulaney would release another stand-up special on Netflix, appear in Seth Rogan's Hilarity for Charity and release a children's musical comedy special for Netflix titled John Mulaney & the Sack Lunch Bunch.

John Mulaney started his comedy career as a writer for Comedy Central and shows like Saturday Night Live. During his work as a comedy writer, he started performing as a stand-up comedian at various comedy clubs where he became a headliner in 2008. He released his first stand-up album a year later and has since released two more specials on Netflix.

John Mulaney & the Sack Lunch Bunch is a musical comedy special for children that was released on Netflix. The special is starring and written by John Mulaney and features songs and comedic sketches. Actors like Jake Gyllenhaal, Natasha Lyonne, and Richard Kind also make appearances in the special.

In John Mulaney's latest stand-up special, Kid Gorgeous at Radio City, he talks about his childhood, his work at Saturday Night Live and other life events. The special was released on Netflix and won the Primetime Emmy for Outstanding Writing for a Variety Special.

John Mulaney - My Body Is Bad at Sports

John Mulaney - Being Bad At Math

John Mulaney Is Turning Into His Mom

Spider-Man: Into the Spider-Verse

Get Show
Picture by: Dominick D, CC BY-SA 2.0, via Wikimedia Commons
Purchases made through affiliate links may result in Stand-up List receiving commission