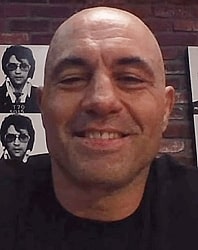 7.5 /10
Based on 4 specials
Joseph James Rogan (born August 11, 1967) is an American comedian, podcast host and works as a commentator for the UFC. Before he started his career as a podcast host of the Joe Rogan Experience or JRE for short, he has worked as an actor and television host. Joe Rogan began his stand-up career in Boston, where he performed for the first time on August 27, 1988, at an open-mic night at the Stitches comedy club after his friends convinced him to try it and after he reportedly spent six months on preparing his first set. After spending a few years doing stand-up and working various other jobs in Boston, Rogan lived in New York City for a few years as a full-time comedian and ultimately decided to relocate to Los Angeles in 1994. In the same year, Joe Rogan got his first national TV spot on MTV's Half-Hour Comedy Hour, after which he got various acting roles. In 1995, Joe Rogan got his most prominent acting role on the NBC sitcom NewsRadio, which lasted until 1999. During his work at NewsRadio, he also started as an interviewer and commentator for the UFC and in 2001, became the host of Fear Factor. After various other jobs as a television host and while still doing stand-up, he started his podcast Joe Rogan Experience in December 2009, which ultimately became his full-time job and grew to become one of the most downloaded podcasts. On May 19, 2020, Joe Rogan signed a multi-year licensing deal with Spotify, reportedly worth over $100 million and making his podcast exclusively available on Spotify.

Joe Rogan has said to initially having no intention of becoming a stand-up comedian. When some of his friends at his gym encouraged him to try it out because of the jokes he'd make while training. After six months of preparing material, he made his start by performing at an open-mic night in a comedy club in Boston in 1988. While doing stand-up, he also took many extra jobs to ensure financial stability like hosting Fear Factor and being a UFC commentator.

In Joe Rogan's latest Netflix stand-up special, recorded in Boston, the city he started his stand-up career in, he talks about everything you expect Rogan to talk about. You'll hear Rogan's opinions on everything from weed to pro wrestling and more.

In this hour-long Netflix special, directed by UFC-director Anthony Giordano, Rogan takes on everything from the then upcoming 2016 elections to pot gummies and talking to dolphins.

Joe Rogan started his podcast 'The Joe Rogan Experience' or 'JRE' in December of 2009 when he recorded the first episode with Brian Redban. It has since grown to become one of the most popular podcasts in the world and gained a lot of publicity in May of 2020 when Spotify announced an exclusive licensing deal with The Joe Rogan Experience.

Joe Rogan Thinks We Shouldn't Have A President

How High Joe Rogan Talks To His Kids

Picture by: Steven Crowder, CC BY 3.0, via Wikimedia Commons
Purchases made through affiliate links may result in Stand-up List receiving commission