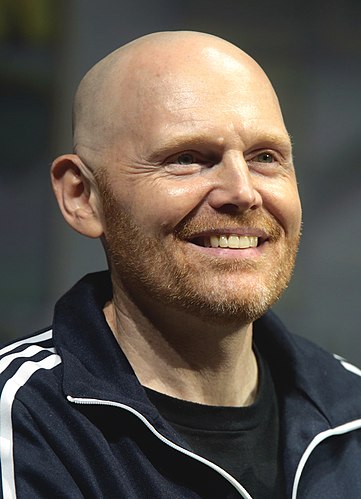 8.0 /10
Based on 9 specials
William Frederick Burr (born June 10, 1968) is an American comedian, actor, podcaster, and filmmaker. Bill Burr was born in Canton, a town that's part of greater Boston, Massachusetts, and also lived there when he graduated from Emerson College with a bachelor's degree in radio in 1993. He briefly had a warehouse job as a forklift driver before moving to New York City in 1994 in order to pursue his stand-up comedy career. Bill Burr first performed stand-up on March 2, 1992, and kept performing at new venues in New York City when in 1996, he had his first TV appearance in Comics Come Home 2. In the same year, he was cast as Ryan Callahan in the sitcom Townies. After that, he had some smaller roles in a few other TV shows and films and released his first comedy album named Emotionally Unavailable in 2003. He would continue performing and releasing a special every few years and started his Monday Morning Podcast in 2007 alongside his stand-up comedy career. In his weekly podcast, he talks about his everyday experiences, sports, politics, and answers questions from listeners. With the success of his podcast, he later added a half-hour Thursday Afternoon Monday Morning Podcast and co-founded his own network called All Things Comedy in 2012. Around the same time, Burr had some more prominent roles in shows like Breaking Bad, where he appeared as Patrick Kuby in the fourth and fifth seasons. In 2015, Netflix released the first season of Bill Burr's own animated sitcom, called F is for family. The series, inspired by Bill Burr's own childhood, followed an American family in the 1970s and went on for 5 seasons. Bill Burr's latest stand-up special, Paper Tiger, was released on Netflix in September 2019 and is his most popular special yet.

Since 2007, Bill Burr also hosts the popular podcast "Monday Morning Podcast" which he records twice a week, on Mondays and Thursdays. The episodes on Mondays are around one hour long and the episodes on Thursdays are about half an hour long with another hour of an older podcast episode from a few years ago. In each episode, Bill Burr talks about various topic like current events, sports and sometimes answers some questions from listeners.

Why Bill Burr and His Wife Argue About Elvis

Part of Bill Burr's special "Walk Your Way Out"

The King of Staten Island

F is for Family

Get Show
Picture by: Gage Skidmore, CC BY-SA 3.0, via Wikimedia Commons
Purchases made through affiliate links may result in Stand-up List receiving commission